Well I just returned to work for the first time since October and it is not so warm here. It is -32F at the moment and I can't say that it was really warm at home either but I did have two weeks off to play and get some things done around the house.
The last two weeks haven't been really good when it comes to my hobbies though. While in Algeria the Lead Electrician had a remote control helicopter that he kept in the shop. After watching him fly it he showed me the basics and I decided that I had to have one. The internet and online shopping are a wonderful thing! By the time I got home I had a brand new remote control helicopter ready and waiting. I have to say that I wasn't smart enough to order one that was easy to fly, oh no, I had to get the advanced version. When I ordered it I thought, how hard could this be? I should mention that this is exactly how I started out whitewater kayaking, but that is a whole different story. I looked online for tips on how to fly a helicopter and I found lots of sites but they all started with the statement that either an instructor or a computer simulator was a must to avoid "costly repairs and downtime". Well, after the second crash, one damaged (actually it was destroyed) tail rotor, two sets of main rotor blades, a bent main drive shaft and a few other miscellanious parts I decided maybe I should order a simulator. Back to the internet!

While waiting on the wonderful USPS to deliver my new simulator (which was delayed in shipping due to a holiday) I figured it was time to brave the cold and go out and ride my snowmachine. When I got home from Algeria our snow cover wasn't near what I was hoping for but it was enough to go out and play in. Before I left in early January and there was even less snow I referred to my rides as bushhogging. This was because when I would come home from riding I would have grass, weeds, and shrubbery stuck in my skis.
On our first big ride before we got our recent big dump of snow I had a little setback when I hit a stump just under the snow that broke a bolt in the undercarraige of my snowmachine. This required getting parts and removing the whole undercarriage to replace one little piece. Luckily the Polaris Shop is located a mere twelve miles from my house and they know me pretty well.
After a few days I was ready to go again, and since we got a huge dump of snow Clay and I headed for the hills (literaly), and the snow was phenominal! But due to a few tuning issues, unfortunately my snowmachine was not! It was however running good enough to hit a stump (different stump) that Clay had uncovered earlier. Of course I didn't just hit it; I HIT it. It, being the stump, sent me sailing over the handlebars and headfirst into the nice soft fluffy snow that I couldn't manage to keep my snowmachine in. Of course the Polaris shop is Closed on both Sunday and Monday and they close at 6pm every other day of the week. This just happened to be 5pm on Saturday evening, an hour from home, and my snowmachine was performing like Free Willy with his left flipper cut off (in other words it kept tipping over to the left and diving as deep into the snow as it could). Suprisingly enough the battery on my cell phone just happened to die and Clay's didn't have any reception. It took awhile and alot of times getting stuck but we made it to where we could use Clay's phone and I called the Polaris shop right before they cosed and gave them a list of the parts I needed so they set them out for me to pick up when I successfully made it out of the woods later that night. Cell phones are a wonderful thing, especially when they work!
I do figure however that without my cell phone and the internet I'd have alot more money in the bank.
I spent Saturday night in Clay's dad's garage repairing my snowmachine so I could hopefully get a chance to actually enjoy our new snow. I went riding both Sunday and Monday and everything was awesome, I'm not sure what happened? I didn't break anything.

The last few days of my time off were good, I had two good rides, and my helicopter simulator arrived (finally). I have to say that after trying to fly on the simulator and crashing a few hundred times, I'm really glad I got it. I would have never had enough parts to get mine in the air without the simulator.
I have to say it gives me a whole lot of respect for my uncle who was a helicopter pilot in the army. I can't even pilot this little thing so I can't imagine how hard a full size helicopter is to fly. I've flown a few times in helicopters but last summer when I flew out to our remote drillsite in one of our Bell helicopters I rode in the copilots seat and really studied the pilots actions, but until getting this rc helicopter I never fully understood all of the physics involved. Since I can't afford a real helicopter and my hair is too long to join the army I guess I'll have to stick to the remote control version.

Here are a couple of pictures snowmaching. 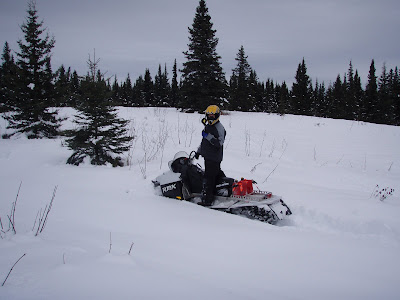 Clay on his new 700 before our last big snow. 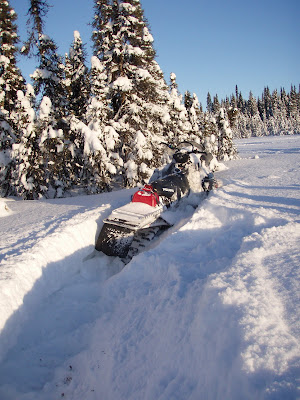 My 600 after the last snow and before the second stump encounter.

So how's that TF workshop? Is it full of snow? I'm really interested to see some pics of how much space you have in the mother in law suite. If you think you have bad snow for snomobiling, Illinois is downright pitiful for snow machine owners, but they try anyway. Brad_bb

DUDE! I love reading about your exciting life/lives! And I live such a boring one! I bet you didn't even know I had access to your blog! (thanks, Sandi). Gonna be around for shearing this year? Hope I'M not! But....probably will be anyway........ Take care and stay safe. You guys are awesome!!!
Julie K.
Hidden Birch Alpacas
half?owner of the infamous Donnie, now cavorting with 2 of the other "big" boys and doing great!