Brad requested a few pictures of the south side of the barn so I thought I'd throw them on here. I don't have any after the sheeting was installed but here are a few right before. Also I haven't cut out any of the window openings yet, as I'm waiting until I can afford the windows to put in them. I thought I did well with my selection of the windows in our house until I listened to a talk from Jack Hebert of the Cold Climate Housing Research Center in Fairbanks and was informed that vinyl sliders are the most inefficient windows on the market. As luck would have it almost every window in my house is a vinyl slider! So I don't want to make the same mistake with the windows on the barn but with the cost of good windows I don't see any getting installed any time soon. I thought about taking the vinyl sliders out of the house and putting them in the barn and buying new triple pane casement windows for the house but I think one more added project would leave me in a white jacket with my arms buckled to my chest... 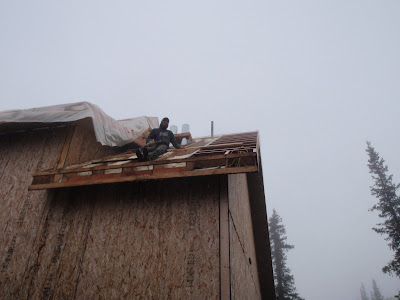 Spraying the South side.

This side seems much steeper than the north side since there is a twenty foot drop instead of a 5/12 pitch roof below you. 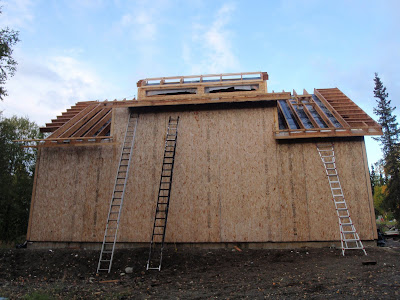 Finishing up the BCI installation. The plan is to have large windows in the upstairs section of the dormer. 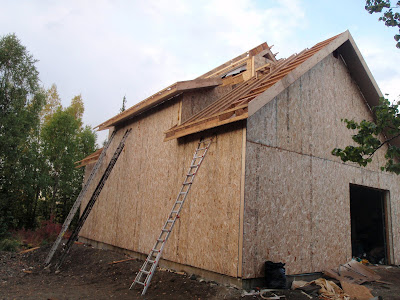 I'm really happy with the two foot eve that we chose. It gives it a really nice look.

I'm not sure what to call or even think about the weather we have been having this fall. On Saturday it was almost 50 degrees here. Saturday was October the 24th, and the grass is still green (except where I dug it up). The weather has certainly been kind to me with all of my projects.


As always I have a ton of things to do before it snows and the ground freezes. My primary goal before winter was to get the roof of the barn insulated and sheeted. My secondary goal was to dig a 350 foot long trench for my power cable from the meter to the barn.


The insulation I was planning on using on the roof of the barn was a polyurethane sprayed between the BCI rafters we installed on top of the tongue and groove. The BCI's aren't structural, they are simply to create a cavity to hold insulation and support the sheathing for the metal roofing to screw to. I was a little stressed at our timeline of getting all the BCI's and soffit material on because the guy that was going to spray my polyurethane insulation needed the roof to be dry and the ambient temperature to be above 45 degrees. Being able to guarantee either of these things much less both of them at the end of September in Alaska is not very good. We had been getting a fair bit of rain that week and the temperature was between 40 and 45 degrees. At kind of the last minute I talked to some guys that did spray in insulation in my friend Brian's house and they could spray in temperatures as low as freezing and the roof could have moisture on it, but not raining. The added benefit was that the foam they use is a soy based product making it "Greener" than standard polyurethane. They also say that compared to polyurethane the soy based foam will not lose R-value as it gets older.

So on the 25th of September two trucks showed up ready to start spraying insulation. The day was marginal as it wasn't sure if it wanted to rain or not and the crew had to sit out two short minor downpours but was patient enough to wait for the rain to stop. They got the whole roof sprayed that day and we covered everything with plastic to keep the water off. Over the next week I had a crew of guys help me get all of the plywood sheeting on. I thought I'd give it a try on my own but after a day and a half and only getting ten sheets on (out of 120) I thought it would be smart to get help. It took six of us two days to get the roof finished up and ready for metal. I was hoping for metal before it snows this year but I am resigned to the fact that it will have to wait until next summer. My other goal was to get the power cable from the meter in before the ground froze. I have a remote ranch panel type meter that I located close to the barn last fall and the power company wanted $6k to hook up power to it. I decided it would be much cheaper to dig the trench and lay the cable myself and locate my meter next to my house meter which the power company only charges $300 to hook up. I got the trench almost complete when a hydraulic hose on the backhoe blew out, putting a stop to my little digging operation.


Luckily as always my dad was home to help me out. He got a replacement hose and finished the trench after I went back to work. I had hoped to have the cable in and trench covered over before I went back to work but that wasn't going to happen even before the hydraulic hose failure. Due to the 350' from the meter to the barn I couldn't use the standard 4/0 size service cable because it would have too much voltage loss, so I had to go one size bigger. Now one might think that wouldn't be too much of an issue, however since it was something I was in a hurry for no one had any in stock. Go figure. I tried every electrical supplier I could find and everyone was out, so I had to special order it. Luckily in the two weeks I was gone the ground didn't freeze and it didn't snow. Now I have my cable in and can spend the winter working on wiring. The only outstanding thing I have left that I wanted to finish before it snows is getting my windows in on the cupola. I ordered them in September and expect them to be done any time but haven't heard anything yet. Once these windows are in I have a couple of gaps to fill around the garage doors and then the barn should hold some heat this winter. 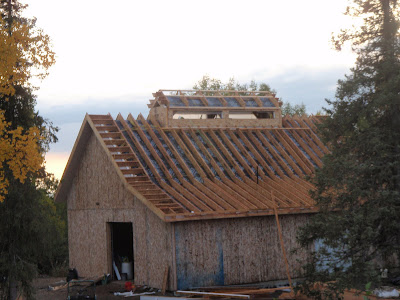 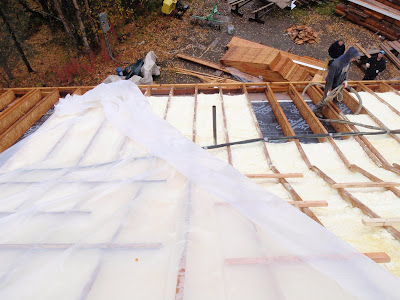 Spraying the north side of the roof. 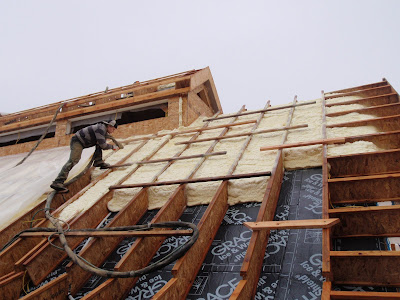 Hopefully this will be enough to keep the barn warm. 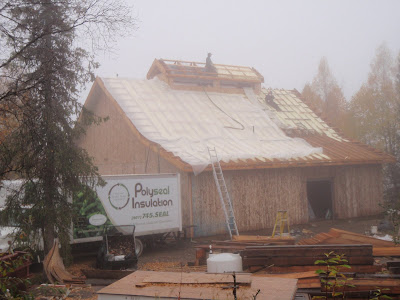 It was definitely a soupy kind of day. 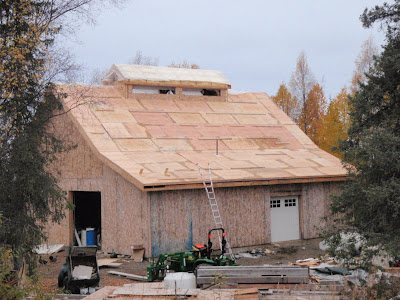 North side of the roof with the sheathing on. I was very happy when the last
sheet of plywood was nailed down...