In search of snow...

Well, we had to drive two hours north to my friend Clay's cabin to find good snow to play in but it was definitely worth it. I like living up Hatcher Pass because I don't have to haul my snowmachine anywhere to ride, I usually just walk outside and go. Since we had 45 degree weather and four days of rain all we have is a lot of ice with about 2" of new snow on top of it. Not much fun to ride in. Clay and I drove up to the cabin Saturday morning and spent the day riding on the east side of the Parks Highway. We rode over the mountains closest to the highway and into a big valley that is the head of about three or four rivers. The area was huge and the riding would have been great except it got cloudy and the light got really flat. Riding in flat light is about the same as riding in complete blackness. You are on a canvass of complete white and you can't tell if you are going up or down and can't tell if you are about to ride over a ledge or into a cornice. It causes a feeling of vertigo. On the way out we ended up having to cross a huge (about a mile across) patch of alders. If you haven't ever experienced being in the middle of an alder thicket I'd have to compare it to maybe being in a field of corn or a bamboo forest. Maybe not quite that extreme but close. Going into it I saw what I thought was a nice line through it but once inside I lost that line and Clay decided he didn't care for my trail finding abilities. Once out of the alders we played our way back to the cabin and called it a night. Sunday morning didn't start out looking too promising as my head and stomach were none too happy with how much I drank the night before. Had it not been for the fact that we drove two hours to get there I'd have gone home and gone to bed. Every time Clay said "You don't look so good Ty" I'd just get up off the ground and hope I didn't really look as bad as he made it sound. However I knew I did. Since I didn't want to be the one to ruin a good trip I toughed it out and about two hours into it I started to feel almost human. It only took getting stuck once to really start sweating everything out of my system. After my head stopped spinning I was really glad I went. We spent Sunday on the West side of the Parks Highway playing in the foothills of Denali. The snow was really good and the day was great. We found a bunch of ravines to play in and every ravine seemed to have a beaver pond in it. Beaver ponds are great to play in because the dams and lodges make great jumps. We may have disrupted sleep for a bunch of beavers but I'm sure they will survive. Hopefully we will get a ton of snow in the next few weeks but if we don't I expect Clay and I will be making another trip to the cabin in the near future.

Since Clay didn't have a camera most of these pictures are of him... 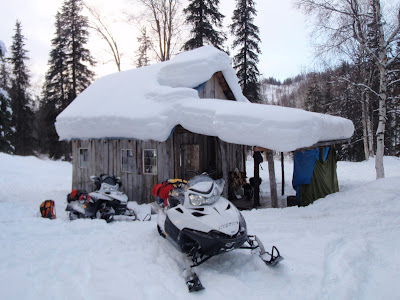 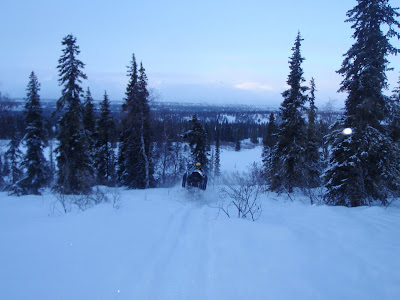 Clay making his way through the trees 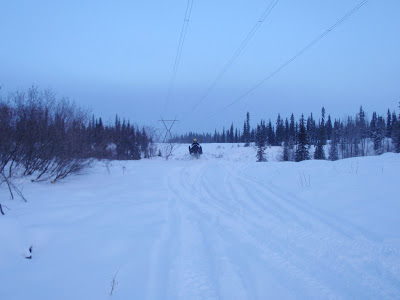 Clay playing under the power line 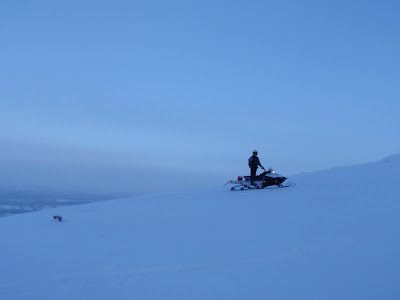 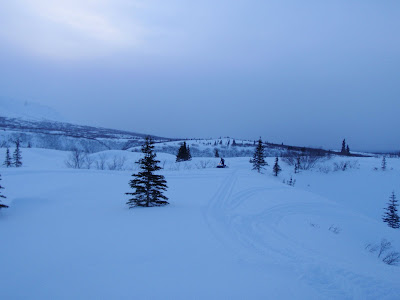 Trying to find paths between the alder thickets 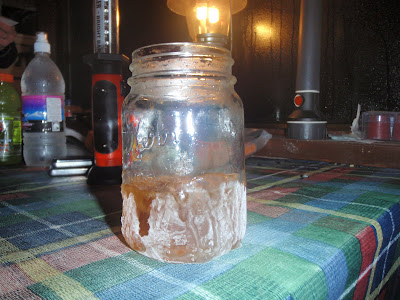 Crown Royal in a Mason Jar; it was much more appealing Saturday night 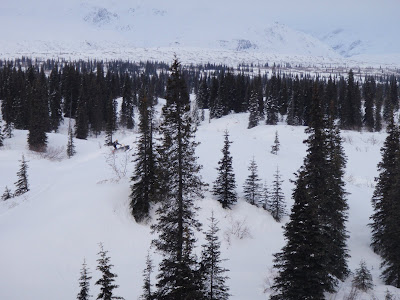 Playing in the foothills of Denali 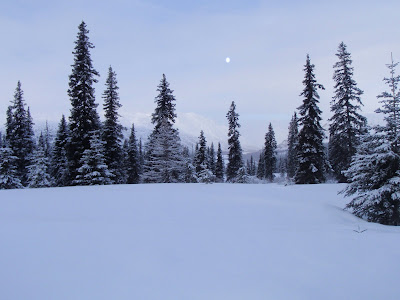 Looking up the Ohio Creek Valley 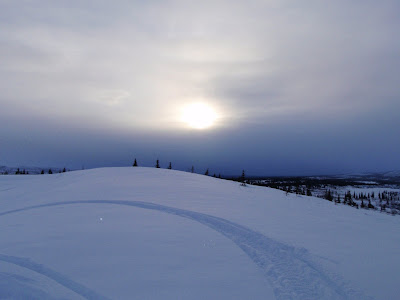 The sun tried to find it's way through the clouds 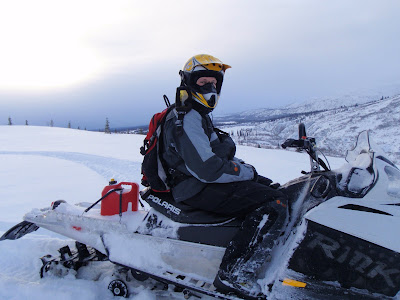 Clay as we debate which direction we should head 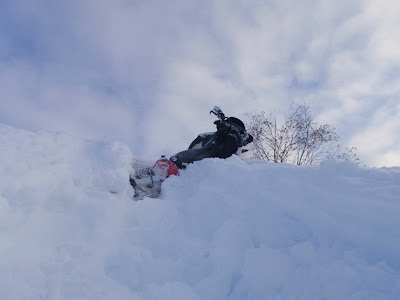 The only picture I have of my sled is when I got stuck. I didn't quite make this incline, but the digging out did help cure my hangover... 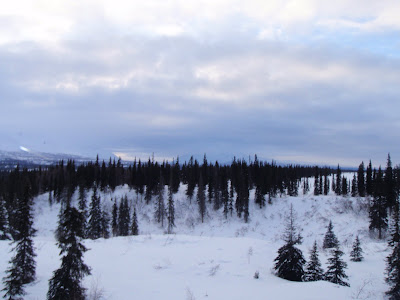 The terrain is endless, with a little more snow to hide the alders this would be heavenly 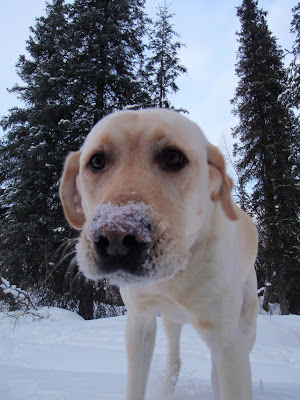 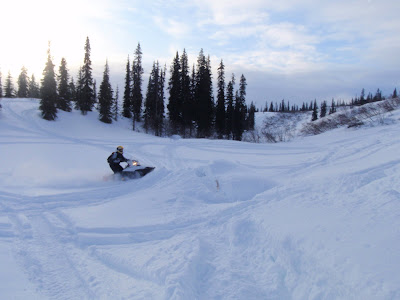 Waking of the beaver 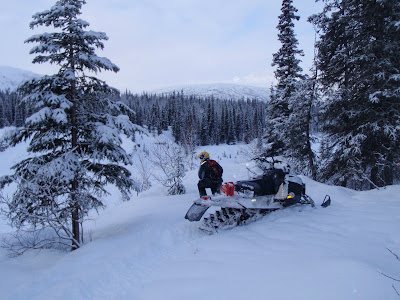 Trying to find a way to the creek bottom 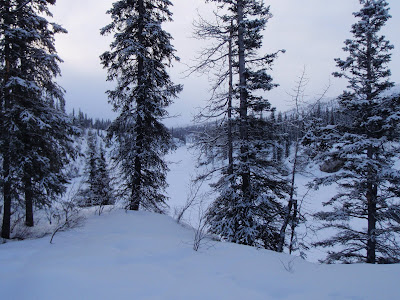 The river banks were a little too steep to get down so we'll have to try a little harder next time...

Is it just me?

I was just reading my own blog from January of 2008 and this time last year I was praying for a little sun in the Sahara Desert and now I am praying for a little snow in Alaska in January. Is it me am I cursed? What the heck is going on; I go to the desert and I can't get sun, it just rained the whole time. Now I'm at home and it rained all last week and we can't get any snow; what is going on???

I went for a ride today and all of our swamps are completely devoid of any snow. I was literally riding across muskeg (tundra) and brush because the swamps have no snow and the lakes and roads are glare ice. About fifteen miles up the road there is about two inches of new (soft) snow but that is it. I did manage to get two pictures while I was riding today; one is of my new snowmachine and the other is looking back down the valley. 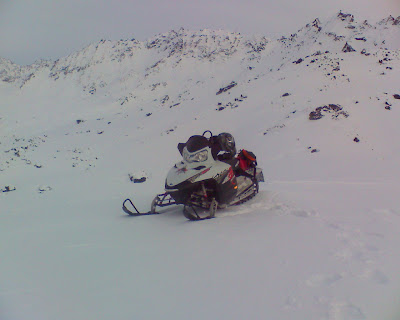 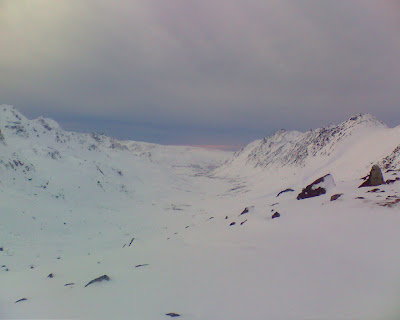 If any normal place in the world had an eighty degree temperature increase in four days, I think people would die of heat stroke. Here in Alaska, we just warm up to five degrees less than our average summer temperature.

Last week it was about -20F here at the house but ten miles down the hill in Willow it got down to -45 degrees. Today it was 45 degrees above in Willow and pouring rain. We lost almost all of our snow here due to wind and rain. A pipe froze and broke the day before I came home from work so I had Sandi turn off the water. I picked up the fittings to fix the pipe on the way from the airport hoping to have the water and heating system back in service Wednesday night. Unfortunately when I told Sandi to turn off the water I forgot to tell her to turn off the radiant heating system controller. This small oversight on my part led to a burnt up (not so cheap) circulation pump. Live and learn I guess. Luckily it was forty degrees for the three days that the radiant heating system was down otherwise things could have gotten ugly in a hurry.

We spent today trying to chip up our glare ice driveway, pump the water out of the barn, and cut up the spruce tree that blew down across the fence in the horse corral. I took my snowmachine out to survey the loss of snow and it may as well have been a jet ski. I'd have been better off wearing a dry suit instead of the down jacket that I was wearing. All of the lakes around here have slush and standing water on top of the ice and there are huge puddles everywhere. I was thinking a snorkel might have been a good idea.

Hopefully the temperature will drop a little and all of this precipitation will turn to snow instead of the rain we are currently getting.

Well, I suppose I should get motivated and write my first post of the year.

Things have been pretty quiet and I haven't worked on any projects since November. The week before Christmas I went to Minden, NV for some technical training for work. Minden is only about a forty minute drive from Lake Tahoe so I spent two days up there checking things out.

Having never been to that part of Nevada or California, I thought it was really pretty. They got about a foot of snow at Tahoe right before I went so I took my snowboard just in case Heavenly was open when I got there. The one day I got to ride, the gondola was closed due to high winds and only two runs were open (also due to high wind), and the lift ticket was still$60. After a little quick math in my head I figured I would save money as well as get a little exercise by spending the afternoon at Heavenly as opposed to sitting in the casino. Based on how much I lost the night before in a short amount of time I think I made the right decision.

Usually I like to go with someone I work with when I go to training. That way I have someone I know to work with in the class and do stuff with in the evenings. I was a little reluctant going by myself not ever having been there before. Things worked out great though (as they usually do) and one of the guys in the class (Aaron) works for Atlantic LNG in Trinidad (the island right next to Tobago) which happens to be a LNG plant that a bunch of guys I work with helped start up. So we hung out together most of the time. The oil and gas world is really quite small.

It was the first time Aaron had ever seen snow so we drove up to Lake Tahoe several times so he could take pictures and play in the snow. It's funny to think that here was a guy that hadn't seen snow until he was 29 and I can't remember a year of my life without it. Although I can't imagine life in a climate that never gets colder than probably 60 to 70 degrees either.

I flew home on December 20th and just barely made it through Seattle before they shut the airport down for three days. Which I was quite happy about.

I decided to trade my 600 RMK (snowmachine) for this years 800 RMK. I've never really wanted an 800 but now that I have it I'd have a hard time going back. I picked it up the night I got home from Nevada and got sick the next day. I laid on the couch for a whole day and watched the snow fall on it. I ended up sick for three days and got over it just in time for a little fondue on Christmas eve. In eight days at home I only got to put 60 miles on my new sled before having to head back to work. It worked out ok though, we all had a nice quiet Christmas. For Christmas Dinner my Mom, TJ (and Aubrey), Rachelle, Sydney came over and Sandi's Mom was up from Wyoming. After my 28lb turkey for Thanksgiving I decided to start a new tradition for Christmas Dinner. I cooked blue cheese stuffed filet mignon and king crab with asparagus. And after recovering from overeating, I think it is a worthwhile tradition to continue.

The last week and a half have been really really cold and even if I were at home I wouldn't be riding so it isn't so bad being at work. It is supposed to start snowing again the first of next week so hopefully I'll get home to a couple of feet of new snow to play in. I have some pictures of Tahoe I'll post also but I forgot my camera at home.