Well, last weekend was a lot of things; sunny, warm, exciting, a new experience, and more than anything it was labor intensive!
Sandi went to San Juan Island, Washington for the week leaving Thane and I to our own devices so we decided what the heck, lets go get some fish for the freezer. Some people may not be familiar with what dipnetting is so let me clarify; in Alaska if you are a resident you can get a dipnet permit for both the Copper and Kenai River and obtain up to 30 Red Salmon (Sokeye) from each river. A dip net is a large net (up to five feet in diameter) on the end of a long pole that is "dipped" into the river to catch fish. When you are "meat" fishing this is the way to go since gill netting is pretty much out of the question for personal use. I personally am not one to spend hours with a rod and reel trying to catch one fish. I commercial fished when I was growing up and I feel like the shortest amount of time spent to catch the most fish is the best way.

Anyhow; my friend Brian Berg was headed to Chitna with his family to catch some reds, so I figured what the heck. Thane and I headed up there on Friday morning to join in the fun. If nothing else we were ill prepared and ill equipped. I guess that is what happens when you kayak the night before a big trip and don't get home until after 1 am and plan to head out first thing the next morning. Since I don't really fish, I don't own chest waders, or any of that kind of stuff so I just took my kayaking gear figuring it would be good enough. After my first and only dipnetting trip on the Kenai a few years ago which consisted of standing on a boat with a net in one hand and a beer in the other and limiting out in a few hours, I figured how hard could dipnetting from shore be? It didn't take but a minute to recall that while on the Kenai I remember watching the guys dipnetting from shore and thinking to myself "boy would that suck" and let me tell you, it does!
I have never in my life worked so hard for seven fish. I fished all afternoon on Friday, all morning and evening Saturday, and all morning Sunday. I could barely lift my arms after we were done. As far as my kayaking gear went, my drysuit and rescue life jacket were bomber but my soft soled booties weren't the best. By Sunday morning my feet felt like someone hammered them for two days with a ballpeen hammer from all rocks in the river. The first night I only caught one fish. Saturday I caught two in the morning and two in the evening, and on Sunday morning I caught two also. When the fish are in thick you can get easily two fish in one pass but last weekend the water was a lot higher than normal and we just missed the first big run. Aside from smelling horrible and being really sore and tired, I had fun and plan to go back again next year. And after all, seven fish in the freezer are better than none!

Now if I could just get motivated to finish my barn...... 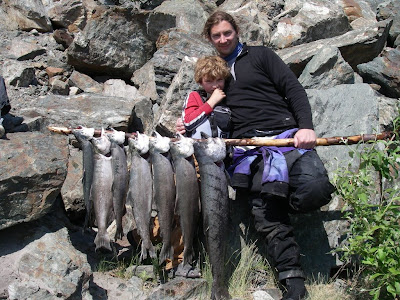 Thane and I with both Brian and my Sunday morning catch. 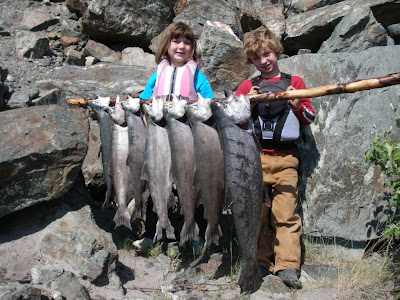 Thane and Sydney Berg and Sunday's catch. Six Reds and one King Salmon. 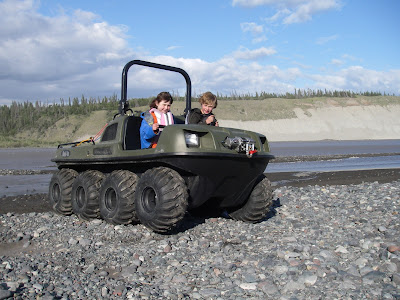