Anyone can do any amount of work, provided it isn't the work he is supposed to be doing at that moment. ~Robert Benchley


It isn't that I haven't spent plenty of time at the computer in the last three months that I haven't added a new post, and it isn't because I have been consumed entirely by my gargantuan projects; it is more a combination of things and the biggest of which is procrastination.

After the completion of the geothermal installation I did spend the next time home trying to turn my nuclear landscape back into something that looked nice. Sandi went to Oregon for a week for a horse clinic so I rented a dozer and Gordy came up for a couple of days and we pushed a bunch of dirt and stumps. I did have a bit of a problem being too hard on equipment as I put a stump through the oil cooler on my Dad's loader which put it out of commission and then I tipped our (Sandi's) tractor over trying to move dirt. All in the same day mind you. In the end we got most of what I wanted to get landscaped completed. I still have some work to do next summer but we do have a fairly sizable new pasture (fairway) that now needs to be seeded. It has been really nice to have the open area as I think we actually doubled our usable acreage with this project.

In October and early November with the help of Ted and his loader, I was able to get the two long walls on the barn and the bottom half of one of the gable ends. My big pile of SIP's has disappeared from the ground in front of the barn and the few that are left are now residing inside the barn. I had to get enough done so that the garage door installers could come hang our garage doors. So now we have two garage doors and one whole open wall. It does stop the wind and snow from blowing through which is nice. I was really hoping to get all of the walls up before Christmas but it has been pretty cold and the daylight is from 9am to about 4pm and usually by the time I get motivated half the day is wasted. This last time home my motivation has decreased in direct proportion to our amount of sunlight. It is really low as is the sun in the sky. Luckily that all changes soon and we will be gaining sunlight soon.

I'm getting a new snowmachine in December so I don't anticipate being a real ball of fire as long as we have good snow.

For Thanksgiving we went to my parents house for dinner and my contribution was the 28lb turkey. I even cooked it! It took me all night to cook but it was ready by 2pm on Thanksgiving day.
Aside from that I'd say things have been pretty quiet around the house. The geothermal has been working really well; the oil fired boiler does seem to kick on to assist the heat pump when the temperature drops really quickly outside but otherwise we have been heating with the geothermal since September.

We got Thane's snowmachine going last week and he and I have kind of turned Sandi's new horse pasture into our new snowcross track. He's a riot to watch and since his machine tops out at probably 15mph (if he's luckily) he's pretty safe. I've taught him how to lean on side hills and how to get unstuck when he gets himself stuck. I have to laugh because when he gets stuck, he throws the exact kind of tantrum that I do when I get stuck. I didn't teach him that part, I guess it's just genetic. 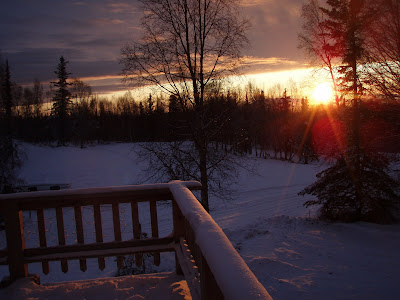 It looks like sunset but it is actually just a November afternoon in Alaska. A view of our new pasture/snowcross course. 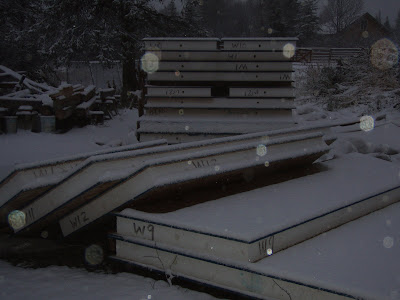 My pile of SIP's that finally disappeared. 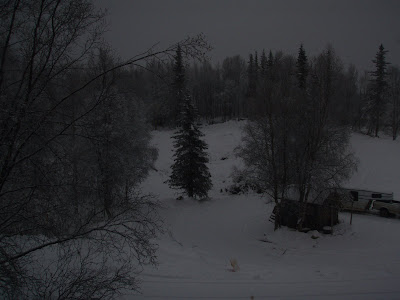 A view of the sinkhole side of the yard. 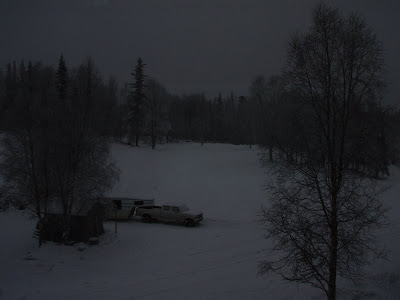 Another view (overcast and wintry) of the fairway... 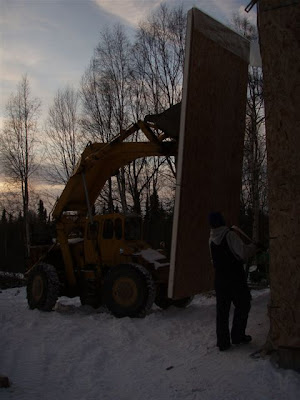 Our two man SIP installation operation; Step 1- get panel in the air 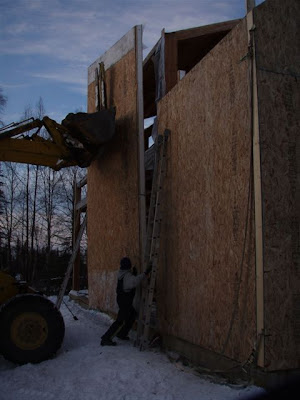 Step 2- get panel on the sill plate 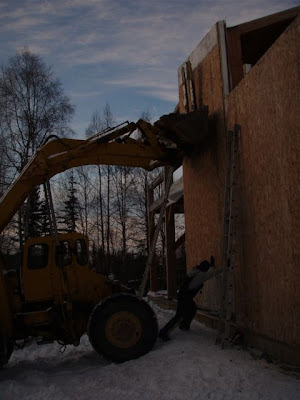 Step 3- lift, tilt, slide, OK don't move until I get it attached to a post....
Did I mention that the brakes weren't working on the loader? Just part of the fun of the project. 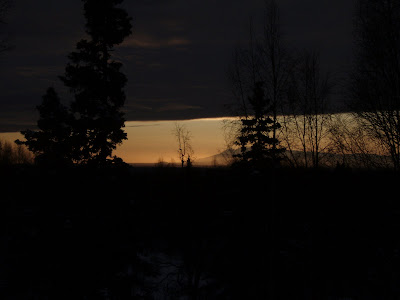 South view from the second floor of the barn 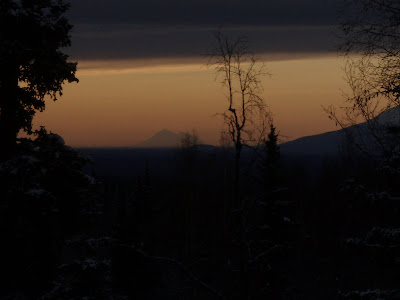 Same view with Mt Illiamna to the left of Mt Susitna. 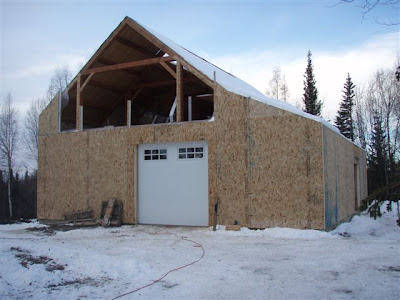 We may not have all the walls (or even a complete roof for that matter) but we do have garage doors! 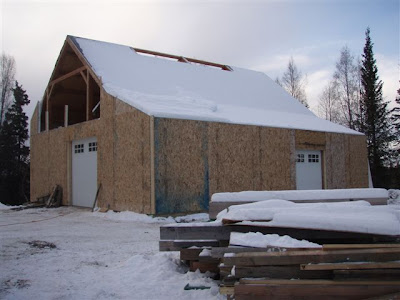 Note the roof opening for the not-yet-complete cupola. 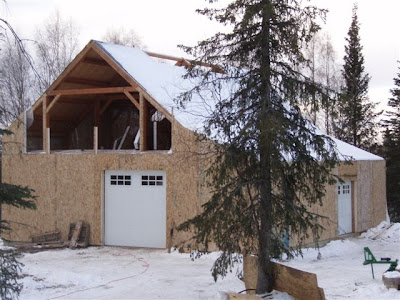 But the doors are nice! 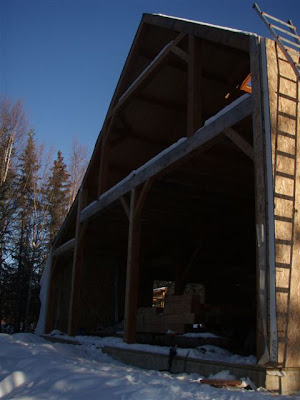 The West wall; I like to think of it as a big window to nature! Not too good of an R value though. 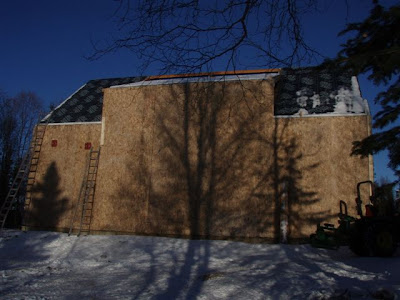 The South wall with all of it's panels... 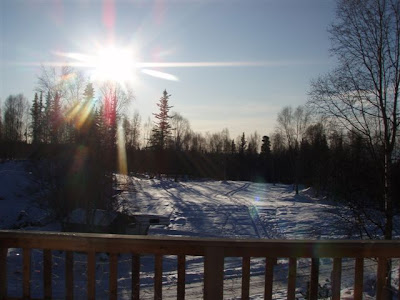 The fairway with a little sunshine on it. 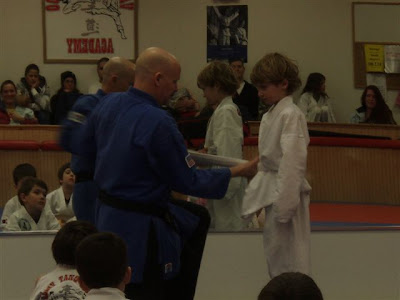 Thane got his Yellow belt in Karate last month. 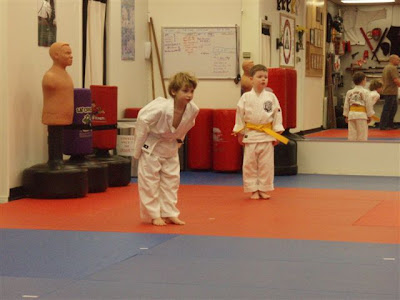 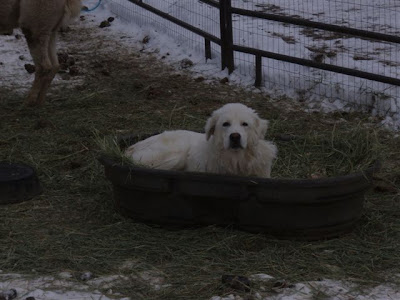 Our livestock guardian dog thinks winter is cold and has decided that sleeping in the hay feeder is warmer than sleeping on the ground. Smart dog....