So much for signs of Spring...

After four to six inches of fresh snow I think Spring has been put on hold for a bit longer. Not that I mind as much as some of the normal people that like to go outside in temperatures that aren't below freezing. Don't get me wrong, green grass and leaves on the trees would be great but getting in a few more rides before all of the snow is gone isn't bad either. All of that wet concrete (snow) that I wrote about last week froze and now is a super hard base with between six inches and a foot of soft snow on top of it. The good part is that you can go anywhere, but the bad part is that it is really hard under that top layer. My sister TJ usually takes Joyce (an elderly lady about five miles up the road) her mail once or twice a week, but since it snowed a bit and she has a really steep driveway I told TJ I'd just run it up there on my snowmachine. I was wanting to go for a ride anyway. The bummer was that I only had five gallons of gas and my machine was totally empty, that only gave me about a quarter of a tank. It isn't that far and five gallons is plenty to go ten to twenty miles on, right? On the east side of Hatcher Pass Road from our driveway is the trail that goes to the Capital Site (where they wanted to relocate the state capitol in the '80's) and it is a mix of swamps and dense trees. I grew up playing out there and still get disoriented between some of the big swamps. Getting to Joyce's is easy and takes only about ten minutes or so and entails crossing about four lakes and two or three big swamps. I made it to her house right away and then headed off in search of powder to play in on Saturday and Sunday. There is a winter trail that goes from Houston to Hatcher Pass and has been used since the gold mining era. It is in between the swamps that we usually ride in and the base of Bald Mountain that lies between the city of Wasilla and Hatcher Pass. I have only run across it a couple of times but have studied it on Google Earth a bit. Mind you I'm not smart enough to get a gps before I set off out there, I just go get lost and hope to find my way home again. Normally this isn't such a bad thing because the tank on my machine holds almost twelve gallons and I usually carry a minimum of two and a half gallons on the back.
Starting to sound like one of those tv shows that talk about a quick outing that turned into tragedy because the victim was unprepared for the elements? That was exactly what I was thinking about fifteen minutes after I decided to try and find my way from the winter trail back to our normal trails through the swamps and trees. Not because I thought I was lost but because I was quite sure I was going to run out of gas at any second. The other two things that made it bad was that I was supposed to pick up Thane after school at three thirty and I had an exam that I have been preparing for at seven thirty the next morning. I really did start to panic, mostly at the thought of post holing out of the woods on my trail I made on the way in. It would have taken me at a minimum about four hours to get back to the road and I wasn't looking forward to that. So as much as I hated to do it I got back on my trail that I came in on and rode at a speed which I determined probably conserved the most gas back to Joyce's house. I asked her if I could borrow about a half a gallon of gas to get me back home. She said "typical snowmachiner" but gave me some gas nonetheless. I made it back home in about six minutes, flying down the road, but still was going to be late to get Thane. I called Sandi to let her know I was going to be late and I was really winded and untying my boot at the same time. While I was talking to her I got a cramp in my side and could barely breathe and before I could tell her I wasn't dying, my cell phone battery died. It took me awhile to find the charger and by the time I got a hold of her she had called my sister in a panic telling her to come check on me. It turned out to be quite the day; Sandi was able to pick up Thane from school and I managed to make my Exam on Friday morning, and even passed it! So all in all everything turned out ok and best of all I wasn't the subject of one of those tv shows.

I was supposed to go riding with Clay on both Saturday and Sunday (thus the search for powder on Thursday) but Thane was really sick and Sandi had to work so instead I stayed home with a sick boy cleaning up.... well, let's just say it was coming from both ends all day. Poor little guy had no energy and was wiped out all day. Sandi didn't have to work on Sunday so I turned over my tub and tile cleaner and paper towels to her and went up the pass to ride with Clay. Saturday had been blue sky and about 38 degrees all day, so of course Sunday couldn't be that nice. The day started out really nice but as it progressed a storm blew in and it got cloudy really quick. When we were on top of the mountain above treeline the light was really flat and you couldn't see any variations in the snow that hadn't been tracked already. It is a weird feeling to come down a long steep hill and not know if it is going to be a smooth ride down or you are going to plunge over a huge cornice at any second. Once you get a few tracks in it you then have some depth perception but before you can run smack into the side of a ravine and not tell it was there. After we played on top and the weather started to turn bad we headed back into the trees and worked our way home through the trees, avoiding the bumpy trails as much as possible.

I hate to think that was my last ride this year but since we are leaving to go to the States for a trip pretty soon, so it might very well be. I suppose if I can finish cleaning the kitchen tomorrow and do a little laundry, I could go get lost in the swamps again tomorrow for a bit. 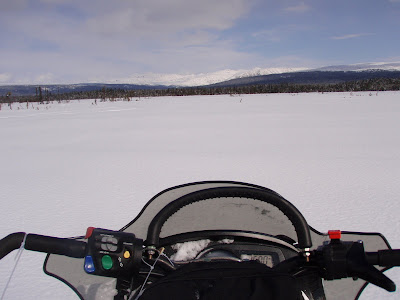 The start of our day, this is one of the swamps across the road. 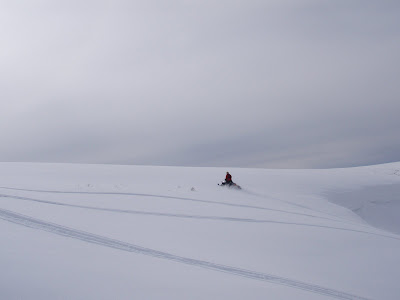 Clay playing in a ravine, notice how all of the white would look the same without a few tracks in it. 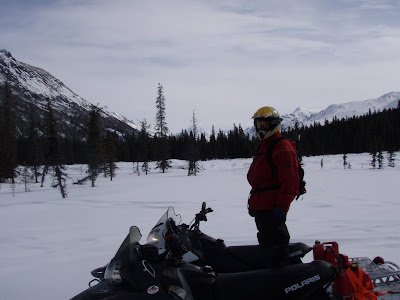 The first valley we dropped into. 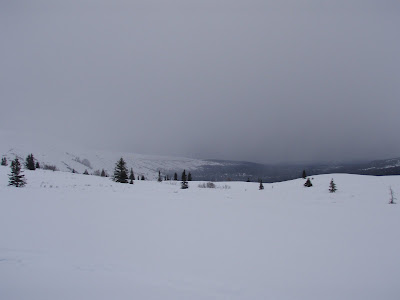 The weather as it was blowing in, it was looking kind of ominous. 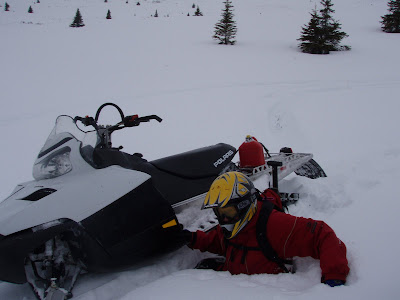 Clay stepped off of his machine to take a picture; it didn't look like the snow was chest deep but it was. 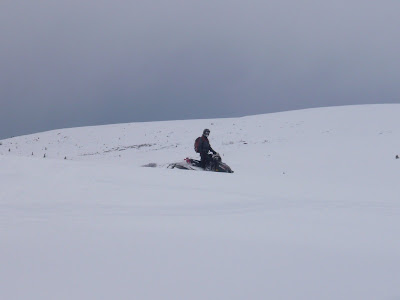 These big white fields of snow aren't what Sandi and her horse are dreaming of; but I love them. 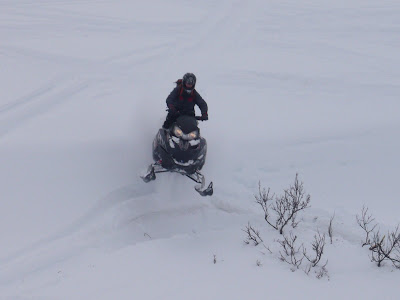 Me, playing in the ravine. 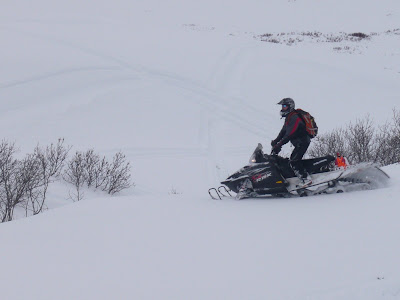 Putting in a few more tracks to help the depth perception. 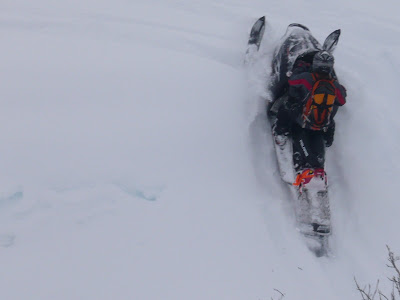 Note that I do have a spare can of gas this trip. 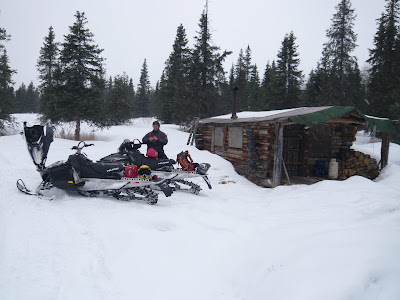 And I did have to use every drop to make it home. This was a mining cabin that we came across on our way off the mountain. 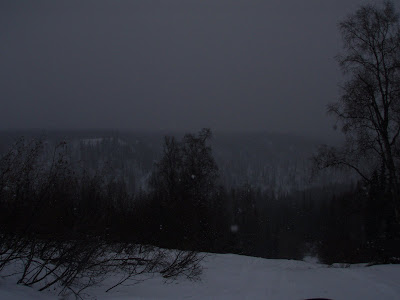 This is what the weather had turned into as we were about to head down and cross the creek, about four miles from home.

So much for Spring.

I made it home last week and was hoping to come home to a few more signs of Spring. After seeing that Minneapolis was still frozen and white, on my way home, I wasn't getting my hopes up for a lot of warmth here. It was in the forties however, making for rotten snow and slushy driveways. Most places have Spring; in Alaska we have Breakup, and they call it that for a reason. The ground is still frozen so the water from the melting snow and ice doesn't absorb into the ground right away. This causes the ground to be a mixture of mud, slush, and ice. In addition to this mixture, it started snowing here yesterday and we now have about four inches of great powder on top of a lot of really rotten knee-to-waist deep snow. I took my snowmachine out the other day and it was like riding in wet concrete. The snow was so dense I was getting stuck going down hill! It was pretty hard to maneuver in, but was still great fun.

Sandi said that last week she was talking to a friend of my parents that said his best memory of me when I was a kid was that me and my friends' favorite thing to do was go out and get our snowmachines stuck. She told him that not much has changed. So following tradition I spent a bit of time digging out of the concrete the other day. Getting stuck has never been one of my favorite things; it is just a consequence of playing in deep snow.

Last night we sat around our first fire in the outdoor fireplace since New Years. It was really nice to sit there with snow falling and a nice fire roaring while we roasted hot dogs and marshmallows.
With the time change it is light until nine thirty now and getting lighter later every night. Summer will be here soon enough!
I took a few pictures on my ride the other day that I think turned out pretty good... 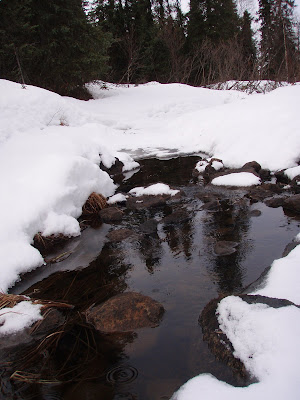 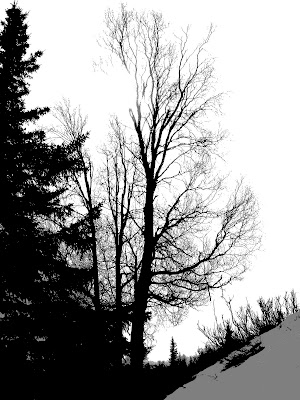 The sun was trying to burn through the clouds and I couldn't pass up getting a picture of it through this tree. Sandi thought it might look better in black and white and as always she was correct. 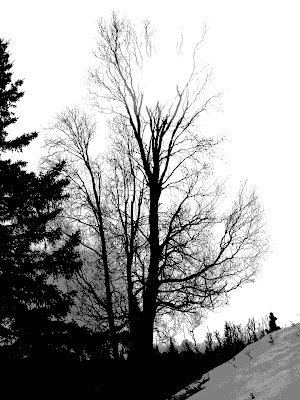 I couldn't determine which one of these I liked better so I posted them both. 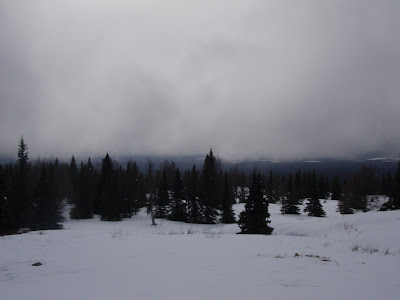 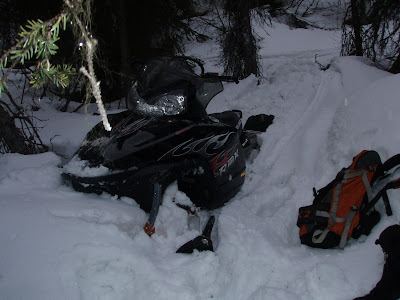 Stuck in the concrete-like snow, a favorite pastime.