A summers worth of work realized.....

After two years of planning, seven weeks of working timbers, and five days of assembling and raising this timber frame, I have an intimate understanding of the phrase "Blood, Sweat, and Tears".

After building the house I wanted a wood shop and Sandi wanted a barn, so we decided to build a structure to accommodate both plus include a mother-in-law apartment above it. Now both mother-in-laws will either have to duke it out or share the space when it is finished!

We poured the slab last summer, but just started working on the timbers in May. Sandi's dad Kris came up from Maine to help for a week in May and got me started. In June, Matt Eddy (also from Maine) spent two weeks helping cut timbers. I worked on getting the rest of the frame cut during my time off in July and August. We planned on raising the frame the first week of September and it took working every available minute to make it happen, but we did make it happen.

On September first Kris and Matt both made the short trip from Maine to help with the raising. Without Kris and Matt as well as Jeremy and Chris Bruner, and my Dad this project would not have come together. Sandi's grandfather Jim Farris spent his 89th birthday with us in June and said that if we were ready by September he would come back and supervise the whole operation. So Jim flew in on the 2nd to make everything happened as it was supposed to. Thanks to all of these guys.
I'd like to thank Brien Jones, and Craig and Sandy Gilliland for taking time out of their week to help us with the raising. Also our crane operator Rod "Crane Guy" Hansen was essential in our safe and successful raising.

Most importantly I have to thank Steven Knox from Maine. Steven worked with us to design the frame and make numerous modifications throughout the process. Even with a four hour time difference he answered the phone at all hours when I was lost and pleading for help.

Here are some pictures of the process, sorry they aren't in order as I was just trying to get them posted as soon as I could. A few are of the two days of assembling the bents and the rest are the raising process. 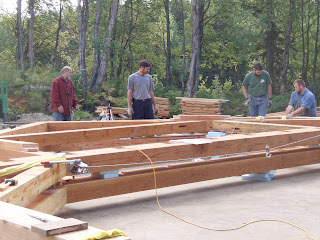 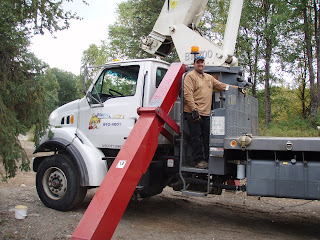 Rod "Crane Guy" Hansen at the ready. Luckily he wasn't sensitive to the fact that everyone kept forgetting his name. 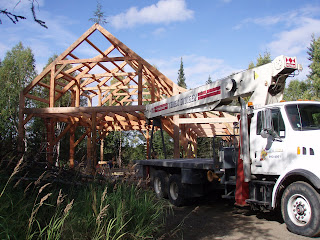 We were blessed with six days of great weather! 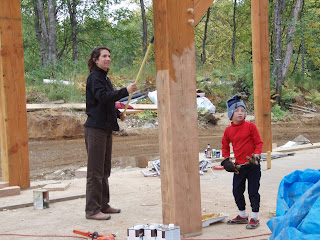 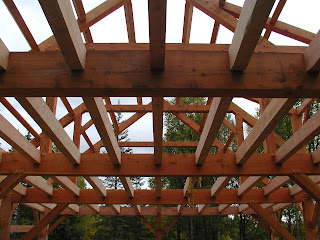 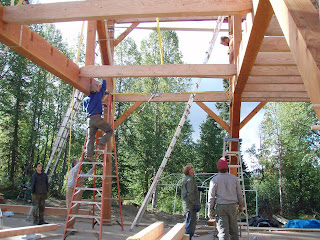 Putting in the tusk tenon floor joists in bay two 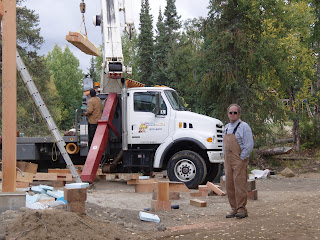 Dad making sure everything is going together correctly 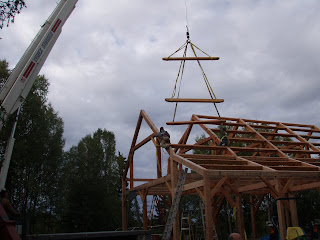 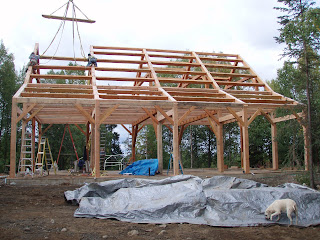 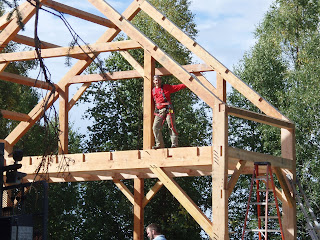 Me, taking in the view and trying to comprehend that this is actually happening 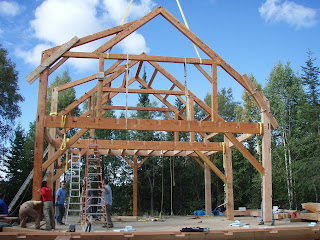 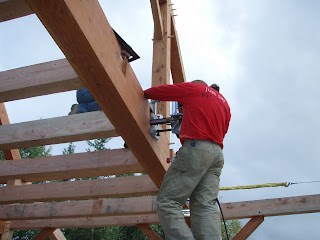 The girt for bent three was installed backwards (my mistake) so we had to modify a few tusk tenon pockets for the floor joists. When you forget to fix it on the ground you have to do it in the air! 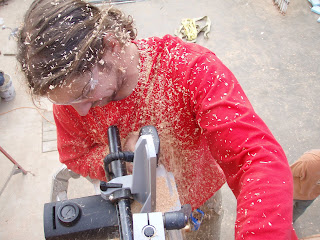 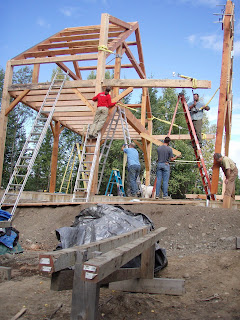 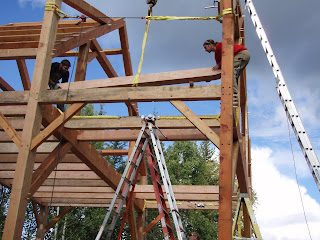 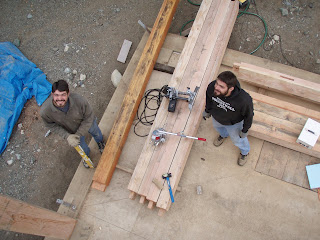 Jeremy and Chris had a smile on the whole time 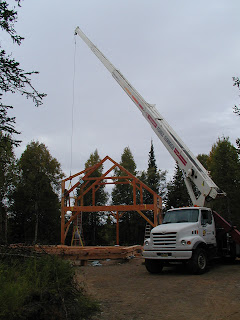 The first day of raising 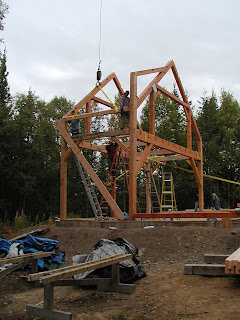 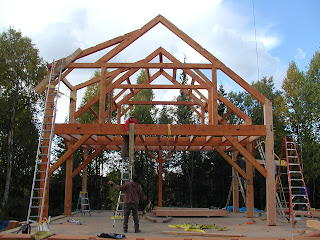 Three bents the first day, not too bad 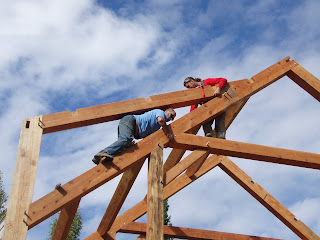 I just wanted to see how high Kris would actually climb... 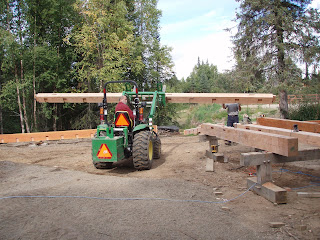 The first day of assembly, Kris moving girt number one 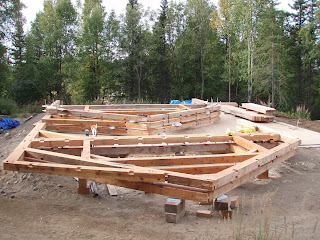 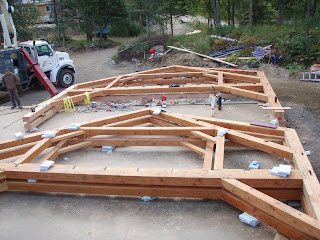 The view from bent one after it went up 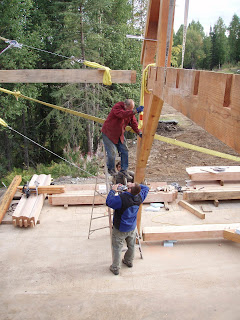 Kris and Matt pulling bent two into the connector 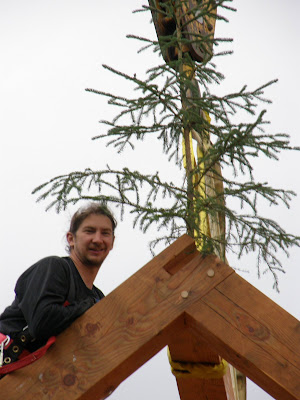 I waited two years for this picture! 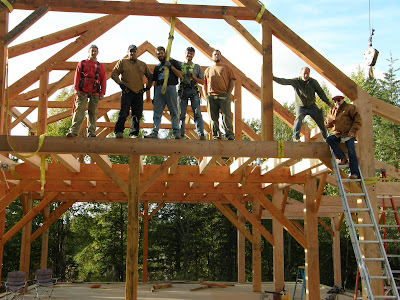 The core raising crew minus my Dad. 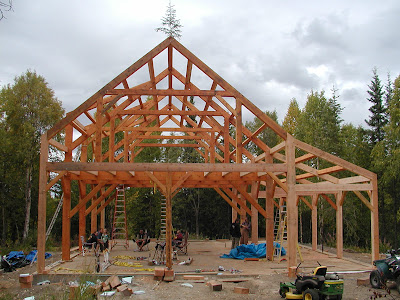 Finally, it is all up and we can sit and relax for a while. 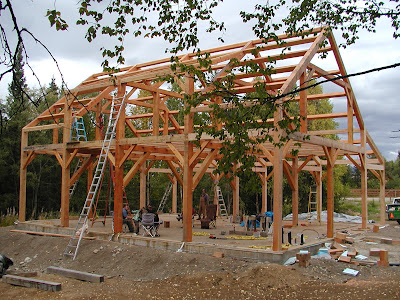 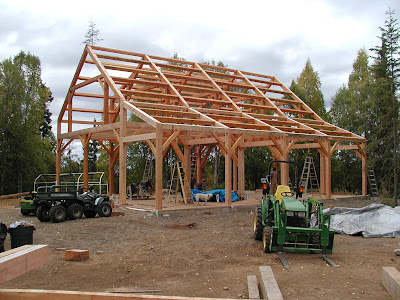 The Northern exposure (the shed side) is the barn side of the frame.