It is always the minor details that really make the difference. For instance, since arriving in Algeria all of this Arabic writing looked completely foreign to me. The first reason is because it IS foreign, and the second is the one minor detail that I was missing. Arabic text is written right to left top to bottom. No wonder none of it made any sense to me! Now it is all so perfectly clear. 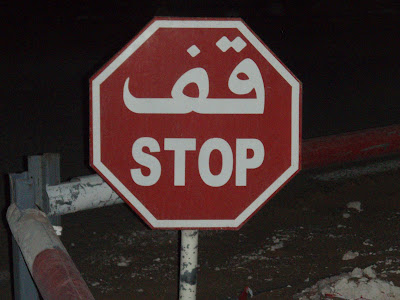 There are 28 characters in the Arabic Alphabet and the script is written in cursive.
I think, if I'm reading this stop sign right there are only two characters and I haven't a clue how to pronounce either one of them. The guard at the entrance to the plant has been trying to teach me a few words but it isn't so easy. His English isn't so good and my retention ability is even less.
I wish I had a video of a conversation I tried to have the other day with three guys who only spoke Arabic, there was a lot of pointing and hand waving. We were all left confused. It was kind of comical.
The construction contractor is a French company and most of the workers only speak Arabic or French, some speak both and only a few speak English. It is a little unnerving wandering around a construction site with tons of overhead work and people yelling and me not knowing if it is because someone just dropped something or I'm about to get hit with something. The language barrier does make everything interesting. For instance last week for breakfast I asked the cook for three eggs, scrambled. I even made a few circles with my finger. A few minutes later I got two eggs over medium. Since they were eggs, I wasn't going to complain. It is a total adventure just eating the food. One day at lunch I was picking at a piece of chicken (or what I thought was chicken) and Randall asked me if I had ever seen a chicken with that many ribs. You know, rabbit tastes ALOT like chicken. My main staple is potatoes. Both lunch and dinner every day has either baked, mashed, fried, boiled, or broiled potatoes. Add a touch of mayo and I'm set.
Posted by Tyson at 9:38 AM

Tyson, I really am enjoying your stories! I am so glad they6 haevn't cut you tongue out or a hand off! We were really worried. Come home safe...RB