And that statement can go for both updating my blog as well as finishing up on my barn. My problem with the blog in the summer is that I usually stay so busy that it is hard to take time to sit down and write. The rest of the year it is easy to take an hour here or there but our long summer days make it hard.

I did do quite a bit of playing this summer; I haven't kayaked since early July but my sister TJ and I took my Dynamic Duo tandem whitewater kayak down all three canyons of Six Mile Creek at a pretty high level. We not only survived the trip but once the fear subsided we actually had fun.

Thane and I made another trip dip netting for Red Salmon again a few weeks ago. It was a much better story this trip compared to the first. Our trip to the Copper River was a three day trip and took about 10 hours to drive round trip and we caught seven fish. Our trip to fish creek took about an hour and a half to drive and between Brian and I we caught 30 fish in about three hours. That is a successful fishing trip in my book! What wasn't fun was filleting fish until dark once I got home. Although I put a batch straight into a brine and smoked it the next day and it turned out quite good. I'd share it but I've been subsisting off of it all week.

The first of August I helped Sandi with her 3rd Annual Lazy Mountain Horse Trials. She started a first of it's kind horse event in Alaska that includes dressage, stadium jumping, and cross country jumping (3 events) all in the first Saturday in August. This was the first year I've been home for it, so it was great to finally see it since I helped build a lot of the cross country jumps for the course over the last few years.

By the time the end of June rolled around and I hadn't worked on any of my priority projects I figured it was time to get on it. Now as always I'm feeling crunched for time as fall and winter are rapidly approaching. In July I finally completed the rafters for the cupola (call it a clerestory if you want) and flew it up in one piece onto the roof. I started working on the cupola last summer but it stalled due to other projects. I was a little nervous that the joinery may not fit due to the twisting of a few of the timbers over the winter but luckily everything fit together and our raising was successful. Sandi's Grandfather Jim was here when we cut the original barn frame and came back in September 07 just for the raising of the barn so I thought it was only right that we should put up this last piece up while he was here to see (and supervise) it. Jim had his 91st birthday with us on June 28th and was eager to help on everything. I had to hold him back from trying to carry the bigger timbers but he helped move rafters as well as with the whole assembly. It was great having him visit again this year, I only hope I'm as fit at 65 as he is at 91 .

After we got the cupola in place I had to finish putting all of my SIP's (structurally insulated panels) on the frame and get started on the roof. Finishing the panels took a lot more time than I had expected especially since I had to order a few extra panels to enclose the cupola with and get them installed. Now we are working on getting the BCI's on the roof and the soffit material in place so I can run all of my wiring and install my sprinkler system before having all of the cavities filled with 8" of soy based foam. My goal is to have metal installed by the time it snows and depending on the weather that could range from the first week of October to the middle of December. Since I'm awaiting a new snowmachine I'd rather it snow before the end of October but not until I get the metal on. I'll post again after I get the foam sprayed, but in the mean time here are some summer pictures. 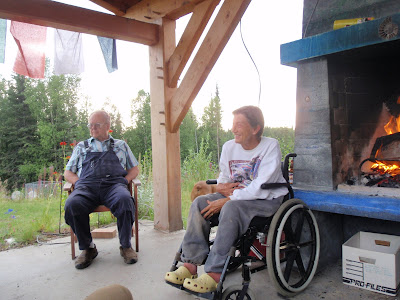 My parents enjoying a fire in the pavilion. 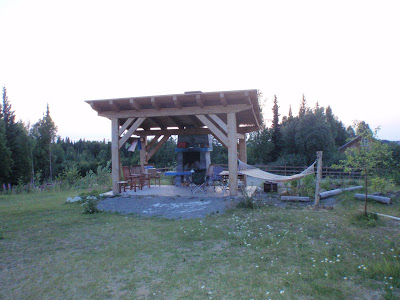 The pavilion after the addition of a key component; the hammock. 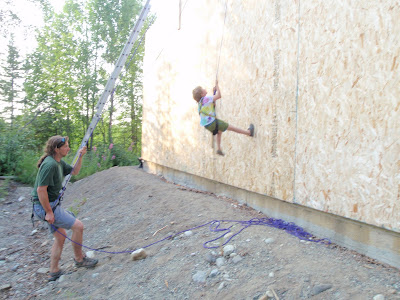 Thane got a climbing harness and 30 meter climbing rope for his birthday so we were repelling on the 22 foot high barn wall. 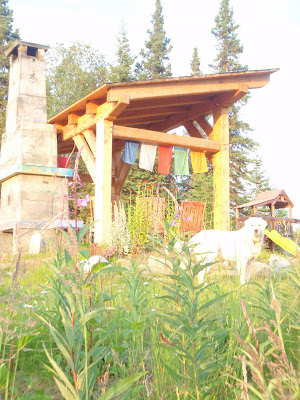 Our livestock guardian dog "Tumbler" beside the pavilion. 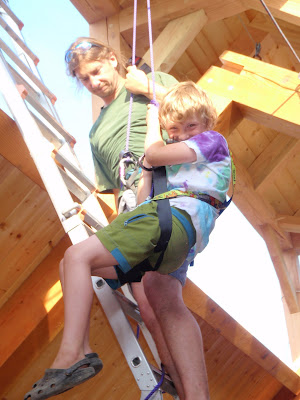 Checking Thane's setup before letting him repel from the rafters in the barn. 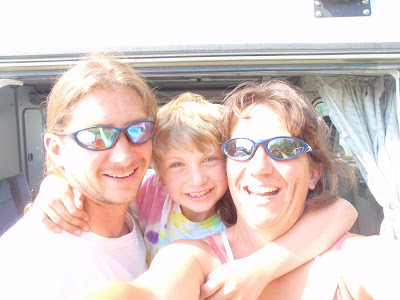 A family self portrait. 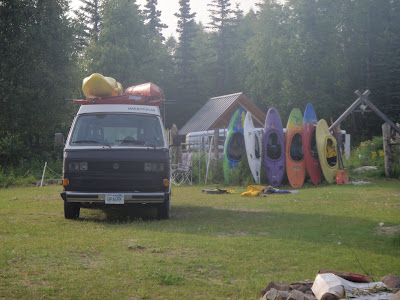 My summer wheels and kayak collection. 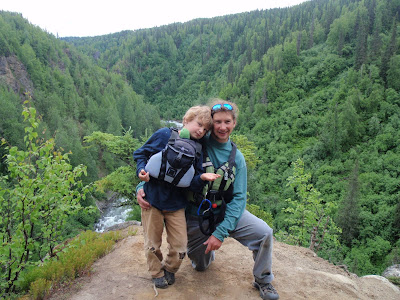 Thane and I above Willow Creek Canyon during a hike. 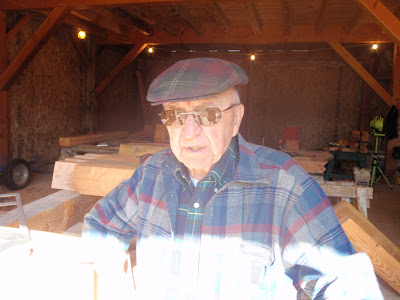 Sandi's Grandfather the Great Jim Farris, supervising the building of the cupola frame. 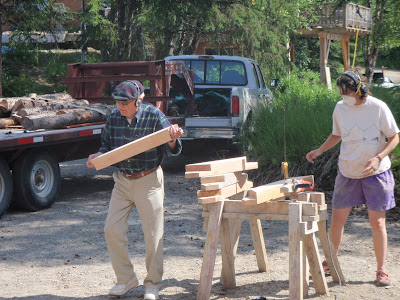 Sandi tasked with sanding even more timbers with Jim collecting the finished ones. There is no free ride at our house; old or young, come stay for a week and we'll put you to work. 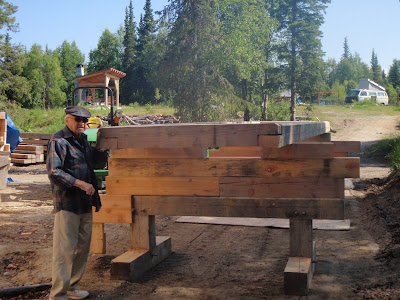 Jim supervising the assembly of the cupola frame. Notice how much the 24' 8x8 on the right twisted over the winter. This made assembly a little tricky, luckily I had lots of clamps. There were several times when I ran into problems that I wondered if this little addition to the frame was worth all the effort that it was taking. 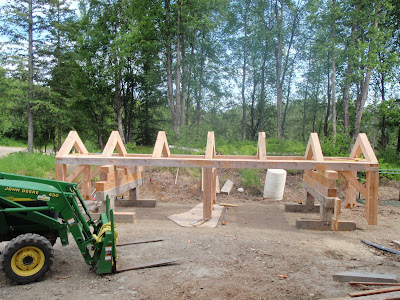 The assembled cupola ready for installation. 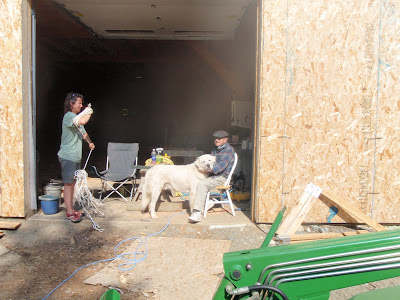 Sandi, Jim, and Tumbler waiting for the crane to arrive. 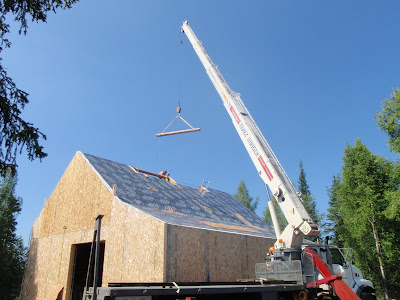 Before we could fly in the cupola we had to remove the two ridge purlins that were in the original frame. 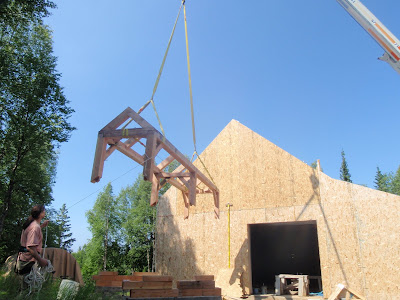 Here we go, no turning back now. I was sure hoping my mortises in the rafters were in the right spot. 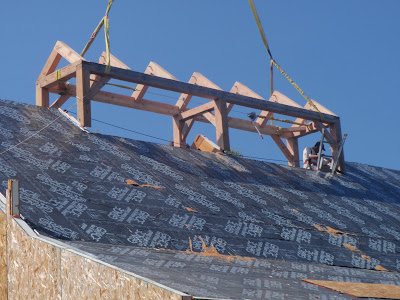 It fit into place faster than I could have ever wished. We had to pull on one leg with a come along just to line up the tenons on the back side and then a few hits with a big hammer and it was in. 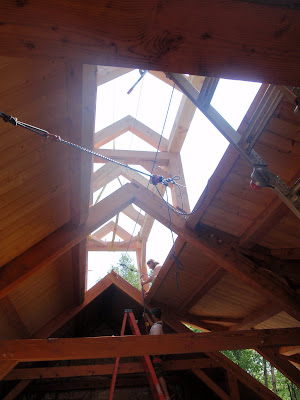 The view from below. 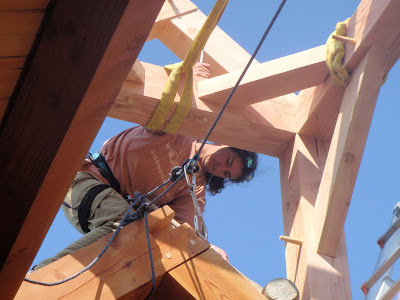 Trying to swing a giant hammer and not fall off of the roof at the same time. 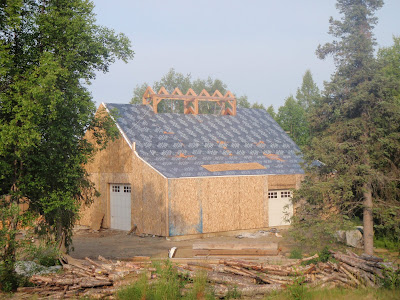 After the stress was over I decided that the extra effort was certainly worth it. The addition of the cupola changed the whole dynamic of the barn. 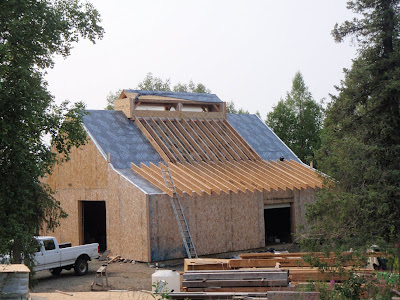 Starting to install the BCI's on the roof . 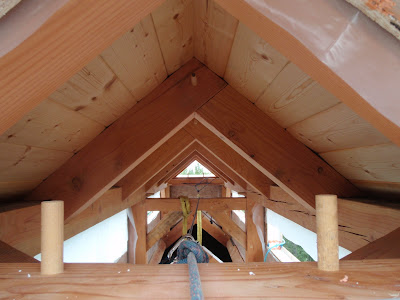 I took this while installing the SIP's on the end of the cupola, I thought it was a really cool view through the rafters. 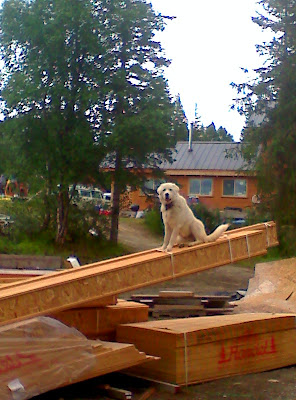 Tumbler guarding my roof lumber package from harm. He slept up there all day. 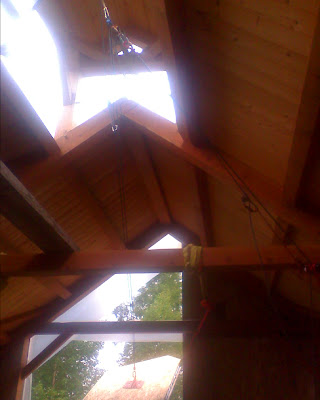 All of my upstairs and lower West wall panels were raised from the inside of the building with come alongs and ropes, utilizing as many pulleys for mechanical advantage as possible. 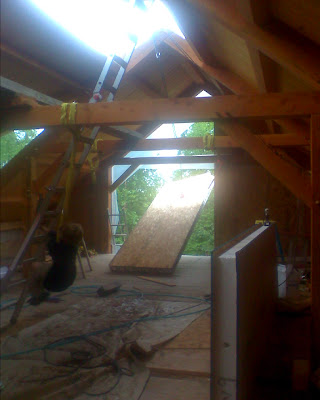 Here is another view of pulling a panel into place from inside. I put up almost all of them by myself and only managed to drop one out of the second story to the ground below. After a slight amount of telling it what I thought of it, I climbed down and rigged it and hoisted it back up and into place. 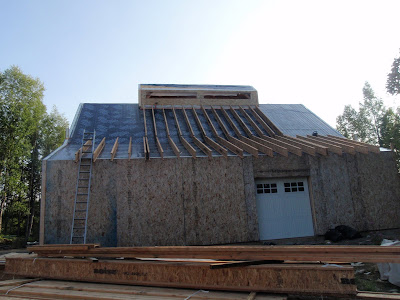 All the SIP's installed and BCI's moving right along. 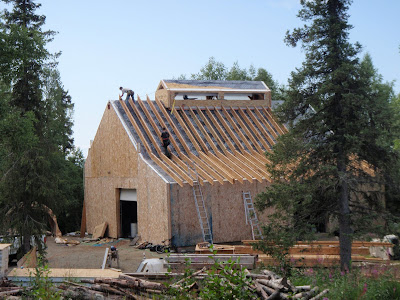 Most of the north side complete with BCI's. Luckily I have great quality help locally. 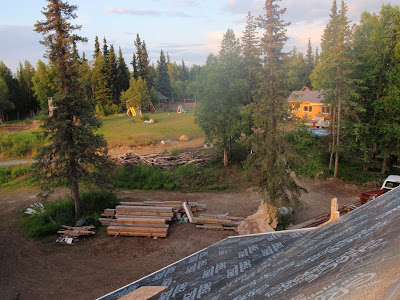 A view of the house and yard from the cupola. The pavilion is behind the spruce tree on the left.

TJ and I on Six Mile Creek in the Duo.

The barn looks great! You are just amazing, Tyson!

Tyson, Great to see you back to work on the barn. It was a major first inspiration for me as I started learning about timberframing. I've had an 8.5X11 pic of your frame on my office bulletin board since you raised it(which is about he time I discovered your blog). Keep it up!