When you depend on air travel as much as most Alaskans do, a volcano can really interrupt your travel plans as well as your daily life. Although I only have to fly a few times a month it is still a pain wondering if I'm going to make it to work or have to make the four hour round trip to the airport to try again tomorrow. Or after my two week shift I have to wonder how many days it will take to get home.

Sandi flew to Seattle yesterday and made it by the skin of her teeth. As they were boarding the airplane the gate agent came onto the ramp and told everyone that the volcano just went off and if anyone wanted to make it to Seattle then they better hurry up and get seated. She said that people were yelling at each other to hurry up and sit down. The volcano erupted at 1:50 and her flight made it out a little before 2:30. Sometime around 3:00 they shut the airport down completely until 3:00 this afternoon. One of my friends has been trying to get out of here since Friday and I think he made it into Anchorage around 5:30 tonight.

My niece Sydney had her 15th birthday yesterday and was really bummed that the bowling alley and all of the theaters and malls closed because of yesterdays three eruptions. I told her she should be happy because not everyone has a volcano erupt to celebrate their birthday.

In 1989-90 Redoubt erupted 20 times over a six month period. Since last week when Redoubt started erupting again it has erupted something like 17 times! This could make for an interesting summer. My only hope is that after our cold summer last year that we aren't stuck under a dark ash cloud all of this coming summer.

For anyone interested here is the link to the Alaska Volcano Observatory site. It is a great site despite what Louisiana Governor Bobby Jindal thinks.
http://www.avo.alaska.edu/

I haven't posted in the last week because I forgot my laptop at home the morning I headed to work and haven't had much time. My last time home I got a lot of good riding in with minimal work required on things around the house (a rare thing), and we had a ton of sunshine. The last weekend I was off we went back up to Clay's Honolulu Creek cabin for two nights of fun and adventure. 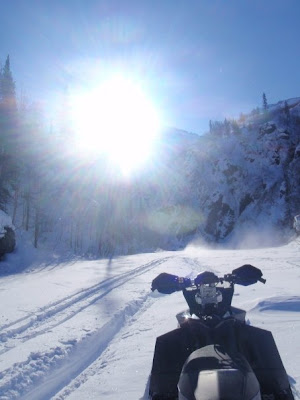 On Friday Ryan, Clay and I rode as far as we could up Honolulu Creek until the canyon got too narrow and the water got deeper than any of us cared to sink a sled into. Also, since I am still waiting for my machine's to get the motor rebuilt I had to borrow a machine from a buddy so I surely didn't want to sink it in the creek. 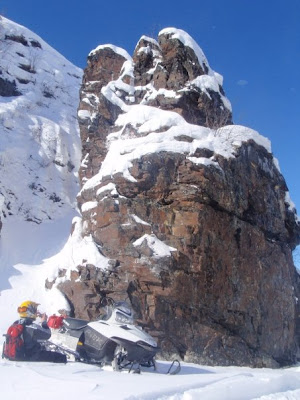 Clay taking some video. The red rocks reminded me of Colorado, this was a magnificent spot. 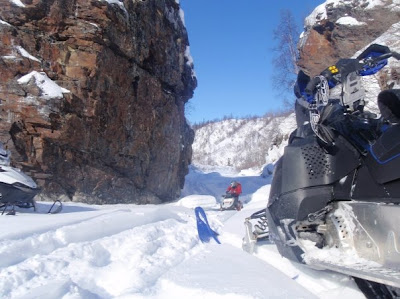 Ryan coming up the canyon. 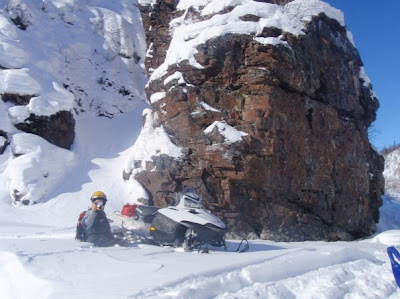 Clay taking a break and a little video in the canyon. 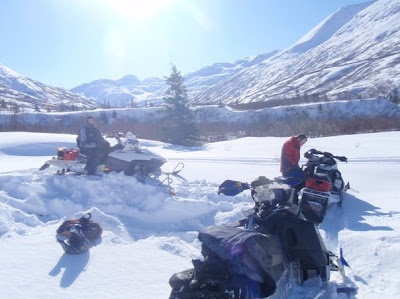 Taking a break after digging me out. Yep, I got stuck again... 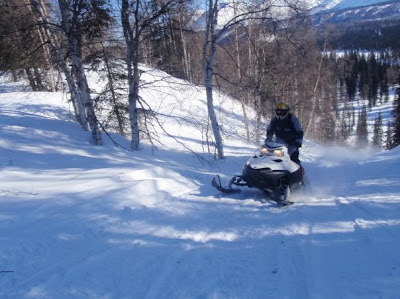 Clay heading up a hill on the trail on our Saturday ride. 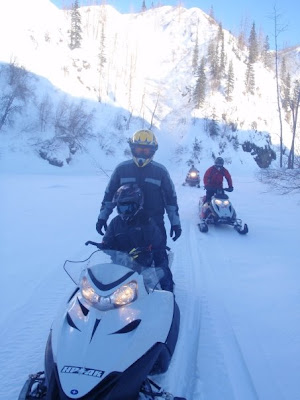 Our friend Stubby (his real name is James Shannon Sullivan but we have been calling him Stubby for so long I wouldn't feel right calling him anything else) who is disabled went to the cabin with us and after much prodding Clay got him to come out on a ride with us. Stubby rode on front with Clay like Thane does when he goes with me and was so happy that he went. It was a little extra work for Clay but it was worth it to see Stubby so happy. We rode down the Chulitna and up the Ohio Creek valley. It is a beautiful canyon and worth seeing. 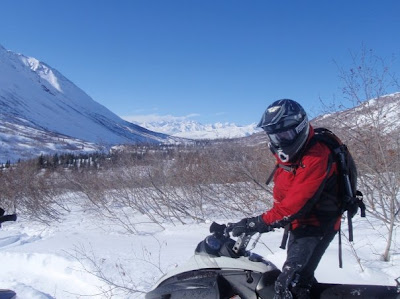 Ryan as we were making our way through a patch of alder. 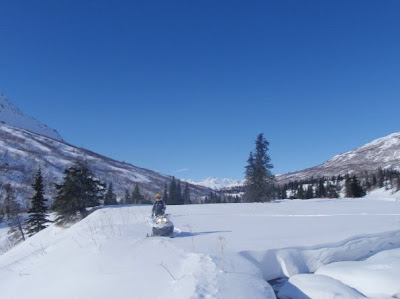 Clay on top of a stepped ridge with Denali in the clouds in the background. 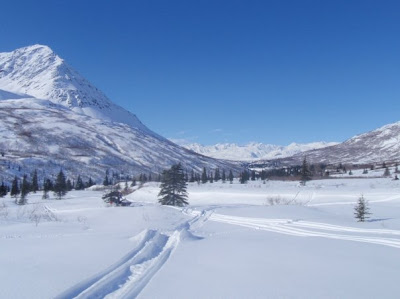 Denali is hiding in the clouds but it is center left. This was yet another amazingly beautiful day. 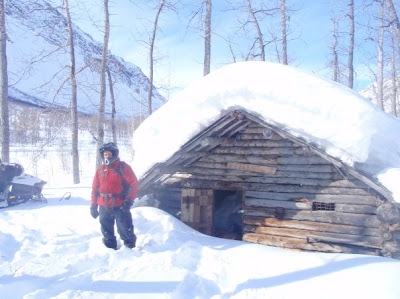 We ran across this cabin and it looked worthy of checking out. We all had to check it out as it is such a great thing to find this far out in the middle of what seems to be nowhere. After Clay read the sign above the door, it turns out that it's a mining claim and belongs to a guy I know from Talkeetna. 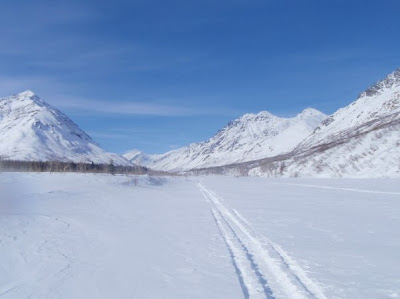 Riding up the Ohio Creek Valley. 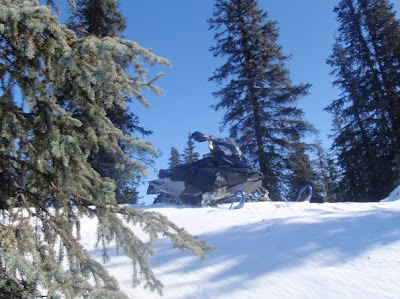 The Ski Doo XP that Luke let me use. 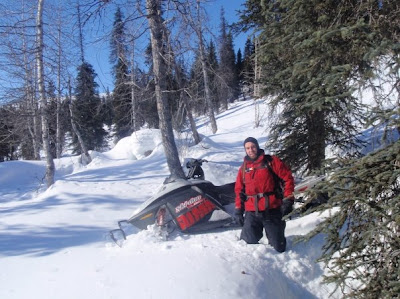 Ryan after helping me get out. 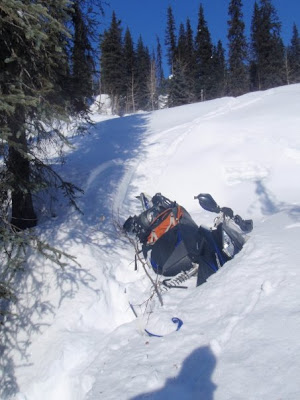 Proof yet again that it doesn't matter what I am riding I can get stuck on the downhill as well as the uphill. 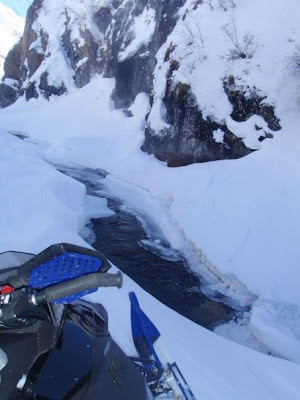 There wasn't a lot of room for error. 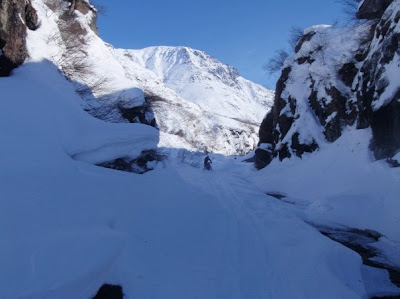 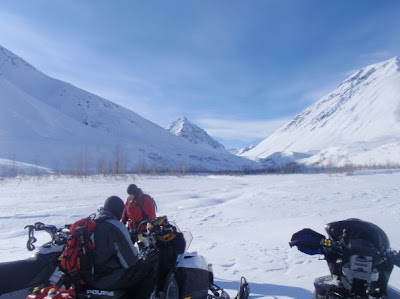 A break before we turned around. 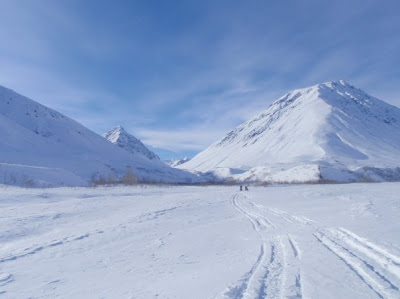 Heading up the valley. This is where we turned around as it was getting late and this was also the park boundary. Hard to believe that the valley on the left runs up to a glacier that comes right off Denali. 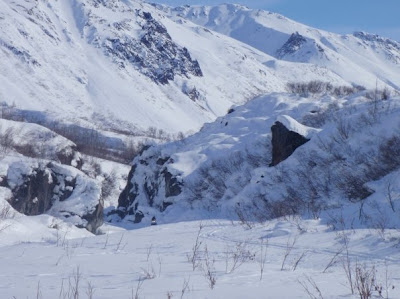 Clay and Ryan coming through the last canyon we encountered on Ohio Creek. 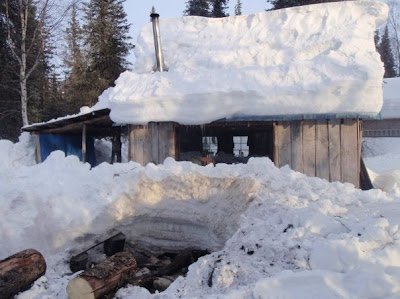 A shot of the cabin and where we melted out the summer fire pit. 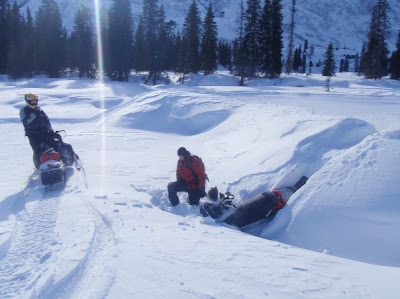 Ryan buried his machine coming over this beaver dam. I think he was trying to show me up on being the best at getting buried.

I like that so many of your pictures have the cheery caption of "_______ after digging me out."

Shoveling is a wonderful form of exercise so the more I get stuck the more I benefit.

Well, Tyson, after reading your response to Margo it's obvious your also the kind of rationalization! Cool pics though, looks like fun. Nice of you guys to take Stubby for a ride. No wonder you're my favorite son-in-law.

Obviously, after reading your response to Margo, you are also the King of Rationalization too! Cool pics and it's nice you took Stubby for a ride. You are the best.